No Jones for Skin and Bones

According to recent medical research, looking at photos of curvy women has the same effect on the male brain as mind-altering substances.

We found Fiona McRae’s online Daily Mail article about this discovery rather stimulating.

Researchers in the U.S. state of Georgia “scanned the brains of 14 young men as they looked at before and after pictures of nude women who had plastic surgery to give them more shapely hips and bottoms.”  The weights of the women in the “after” photos wasn’t reduced, just redistributed.  Apparently, “seeing the post-operative shots excited the brain’s ‘reward centres’ – regions more usually activated by drink and drugs.”  Hourglass figures proved especially stimulating.  One doctor speculates that this is because broad hips are linked to good health and childbearing.

While the article admitted that the research wasn’t complete or particularly groundbreaking, it is a start in challenging standard definitions of female beauty and attraction. 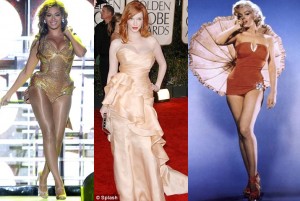 Take a Hit of These Gorgeous Hips!