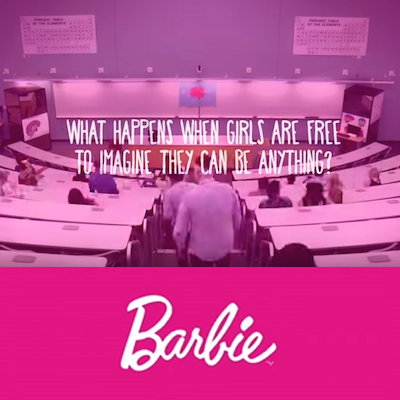 The Barbie Doll has been the subject of some controversy over the past few years, as some quarters feel that the doll promotes gender stereotyping as well as creating negative body image issues. In order to combat these negative sentiments , a leading advertising agency has been appointed by the makers of the Barbie Doll to create a commercial named ‘Imagine the Possibilities’ that aims to empower girls, return the brand to its roots and celebrate young girls’ journeys of self-discovery.

Interestingly ,a recent study in the USA found that girls who play with Barbie’s see themselves in fewer male-dominated careers than those who play with Mrs. Potato Head.

Mattel, the makers of Barbie have created the new ad to try and change perceptions of the childhood classic. The advert shows five young girls role-playing jobs in a real-life situation and captures the reactions of the adults around them.  Towards the end of the commercial you see that the young girls are in fact playing with their dolls, and are imagining themselves in professional scenarios.

We love the advert and think it’s a step in the right direction for the much loved children’s doll.

Tell us what you think of the commercial? , did you play with Barbie dolls? , which one was your favourite? It will be great to hear from you.