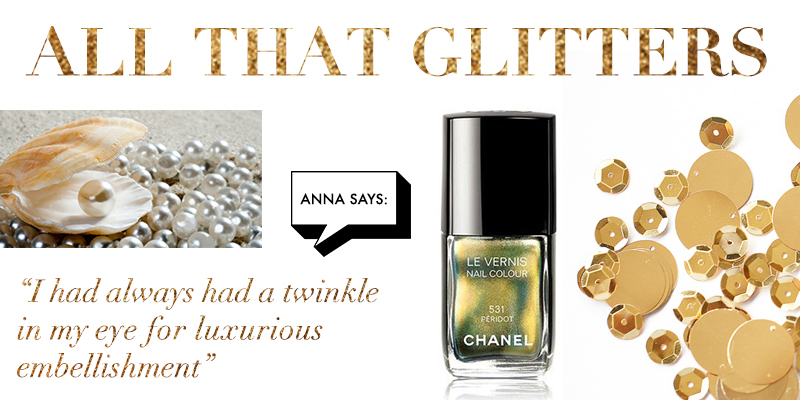 As the holiday season approaches (yes, girls, it really is just around the corner!) I have already begun searching for the perfect sparkly outfit with which to salute the New Year. But the glittery road to the right glamorous, high-class look is fraught with peril. So many Christmas and New Year’s dos are peppered with over-spangled fashion don’ts and you wouldn’t want to be mistaken for a Christmas bauble.

So I thought I’d take the time to consider our fickle friend, the sequin, as well as her alluring cousins, beadwork and embroidery. How do we keep these embellishments from being embarrassments?

I have always had a twinkle in my eye for luxurious embellishment. No matter the time of year, I myself love to wear and to surround myself with sparkle, shine and ornate handiwork. On a trip to Mexico, I came back laden with tunics and blankets embroidered with fantasy animals and scenes in every colour of the rainbow. In China, I was head over heels for Tibetan beadwork and embroidered dragons. When I browse through vintage markets, ornate Victorian cushions, linens and throws catch my eye. My passion for glitz is not just limited to textiles. My girlfriends and I love shopping for jewellery. And my beloved gold shimmery Peridot nail polish from Chanel’s autumn collection is always a conversation starter.

I’m definitely not alone in my love of sparkle. Human history of jewelry shows a long love affair with glittery embellishments. Ever since humans began wearing clothing, they have invented ways to decorate their garments. When early man wasn’t dodging dinosaurs, he was figuring out how give his mammoth pelt maximum impact with beads and other decorations. In fact, numerous archaeological discoveries indicate that beads and embroidery were, perhaps, man’s first fashion luxury. For example, a fossilised Cro-Magnon hunter dating to 30,000 BC, was discovered in Russia wearing clothing heavily decorated with hand-stitched horizontal rows of ivory beads. In Siberia, animal hides dating from between 5000 and 6000 BC were found covered in elaborately drilled shells and stitched with decorative designs. 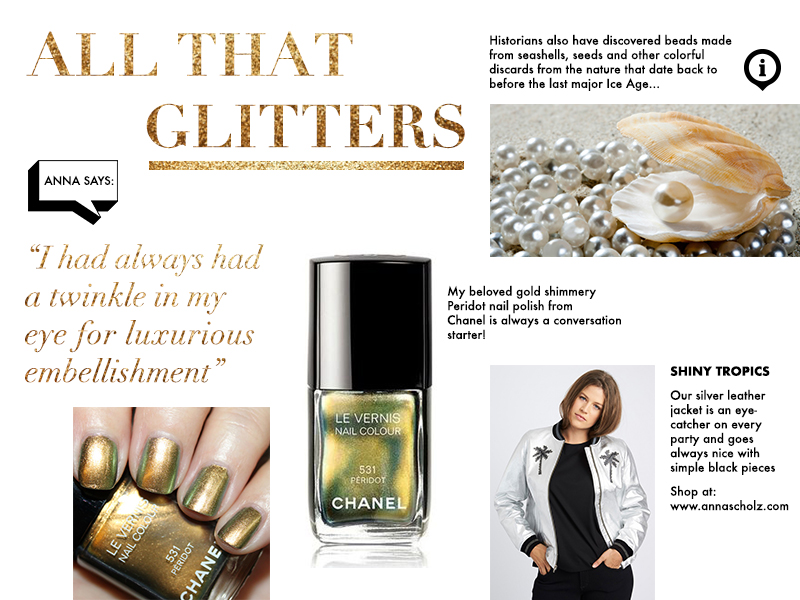 Historians also have discovered beads made from seashells, seeds and other colourful discards from nature that date back to before the last major Ice Age. Graves from the Stone Age unearthed on Israel’s Mount Carmel revealed human skeletons wearing headdresses beaded with shells and the thin, splintered bones of small gazelles. The excavated tombs of Ur in Iraq show that by about 2500 BC, the people of that region created amazing constructions from thousands of tiny lapis lazuli beads. Over all the years, the need to bead endures.

The sequin is no spring chicken either. Evidence shows that shiny gold discs were being used as decoration on clothing in the Indus Valley as early as 2500 BC. An early version of the sequin also was discovered in King Tutankhamen’s tomb in Egypt. Numerous hammered gold discs were hand sewn on a shirt designed to send the Pharaoh into the afterlife in style.

By the late 19th century, embroidery machines helped to bring fancy thread work to the masses. In the latter 20th century, a man named Herbert Lieberman developed a plastic which gave us the first washable sequin. Affordability and durability have allowed glitzy garments to be more and more a part of our everyday lives.  From the beaded cardigans of the 50s, to the embroidered kaftans of 60s hippies, to the metallic sheen of the disco 70s, to the bedazzled rhinestone jean jackets of the 80s, we have continued to enjoy a bit of sparkle beyond just special occasions.

All of this brings me back to my original question: How to best sport sparkle in this day and age? The invention of the first sequin was surely followed by the question, “Is this too much?” And yet we continue to get embellishment in fashion so wrong. Have we learned nothing from our ancestors?

I personally feel that sequins, beads and such are fine for the daytime, just in moderation. A little usually goes a long way. Wearing embellished accents keeps a look uncluttered and modern rather than like Grandma’s lampshade. A contrasted look is cool and glamorous too: counter pose a sequinned top with faded jeans, or a glittery skirt in combination with a simple black top. 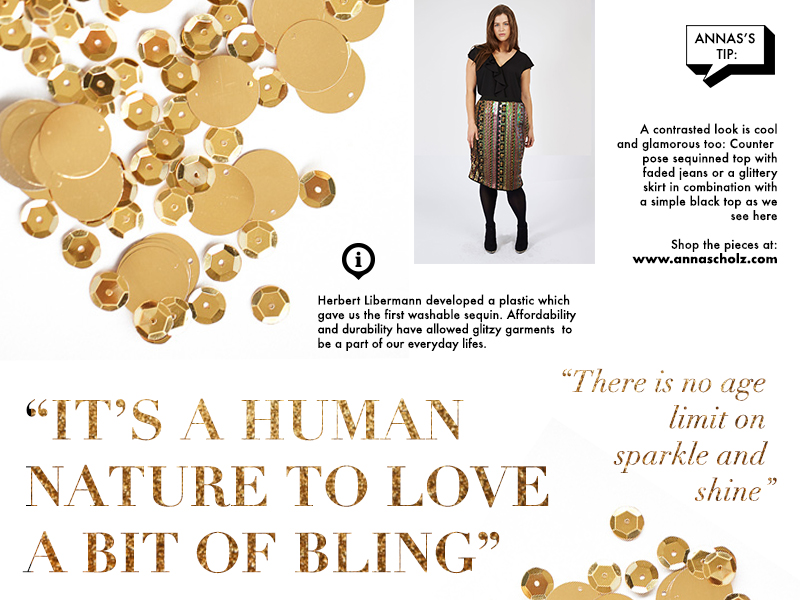 Some people believe that fully sequinned dresses or outfits only belong in Vegas. However, I feel full-length sparkle is fine for a glitzy evening look — especially on New Year’s Eve. But, in my experience, there are a few rules of thumb to follow that help to avoid a faux pas. First, wear a dress that fits you well and is more classically gorgeous than an overly trendy silhouette.  Second, try not to wear a dress with more than two different coloured sequins, or pick one that utilises a small family of complimentary colours. Also, it’s important to wear sequins or beads which complement your skin tone. Women with tan or brown skin have more options, but it’s easy for pink or yellow sequins to make a pale-skinned woman look washed out. Black sequins almost always look sleek and shimmery on everyone rather than tacky. Avoid big statement jewellery, shoes or purses which compete with your sparkle. And, last but not least, keep your hair simple and classic to avoid looking like a ballroom dancer.

I also don’t believe there’s an age limit on sparkle and shine. The above rules will always serve anyone well. No woman of any age needs to go out looking like a figure skater. If you’re worried that you’ve overdone it, you probably have.

So, with all of this in mind, I shall join the throngs of women looking for the ultimate sparkly holiday outfit. And as I search, I will think of all those in history before me who followed their dreams to shine, who first took bone needle to animal hide and dared to “go there,” who kicked it up a notch and added jazz hands. One thing all my research has taught me is that, whether you’re King Tut or a Texas beauty queen, it is human nature to love a bit of bling.